The stuffing box is the seal around a boat’s propeller shaft that keeps the water out and allows the shaft to rotate freely. Ninety percent of all sailboats with auxiliary inboard engines have a flexible stuffing box with traditional packing gland that usually goes unattended until it begins to leak, usually at the worst possible time.

Check your boat’s stuffing box immediately after launching,and regularly throughout the season. Note the correct installation of the hose clamps on this flexible stuffing box.

Shaft seals do the same thing as a flexible stuffing box, but without the packing seal. The seals have a bellows hose which is clamped to the stern tube. On the end of the bellows is a carbon/graphite flange. At the engine end of the shaft there is a stainless steel rotor which mates with the carbon/graphite flange. The stainless rotor is pressed against the flange, compressing the bellows and creating a seal between the flange and rotor. When the shaft turns, the carbon flange is fixed and the stainless rotor spins with the shaft. The graphite provides lubricant and a thin layer of water provides the seal for the shaft. Most shaft seals have a nipple for a vent hose to ensure that the stern tube remains full of water for cooling the carbon/graphite flange. On high-speed applications, the vent tube is connected to the raw water side of the engine, so seawater can be injected into the stern tube for cooling. 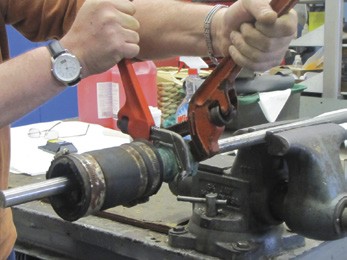 As with all jobs, disassembling a stuffing box is easier if you have the right tool, and the best tool for the job is the Ridgid E-110 wrench (you’ll need two).

Flax packing has been around for 100 years. This greasebased packing can last for years and is very reliable. The one drawback to flax packing is that if the stuffing box gland nut is overtightened, flax packing can heat up in the gland nut, which causes dangerous temperatures and scoring of the shaft. So, when adjusting a stuffing box with flax packing, hand tighten the nut, adjusting it to reach the two to three drops per minute rule.

Teflon packing is great to use, and can last longer than flax packing. But this white material is hard to cut properly and requires a fresh razor blade. It’s also tricky to adjust the packing gland to get two to three drips a minute, and a number of adjustments may be needed to get it right.

Graphite packing is excellent because it’s a lubricant, which reduces the chance of burning the shaft. There are two drawbacks with graphite packing. It is very expensive and it can promote corrosion because graphite is high on the galvanic table, although I have been using it for years without an issue. 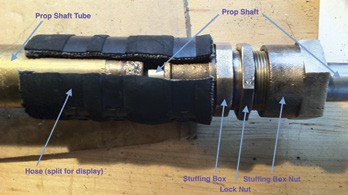 This “cutaway” photo, courtesy of the Chesapeake Bay Alberg 30 One-Design Association, shows the orientation of parts inside a flexible stuffing box. © alberg30.org 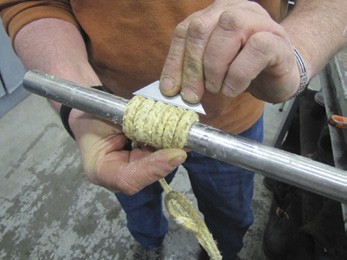 To make properly sized rings of flax packing, wrap a length tightly around the prop shaft and cut across the rings with a sharp razor blade.

Now it’s time to size up the new packing. Packing comes in various sizes, with 3/16 inch and ¼ inch the most popular sizes for shafts in the one-inch range. It is very important to match the size of the packing to the opening in the gland nut. To cut the packing to length, wrap a length of packing around the shaft five times and pull it tight around the shaft. Using a sharp razor blade, cut across the rings with a diagonal cut. You now have four or five sized rings of packing. Now, insert the packing rings into the packing nut, offsetting the joints of packing from one wrap to another by 120 degrees. Generally, three to four rings will fit inside the nut. 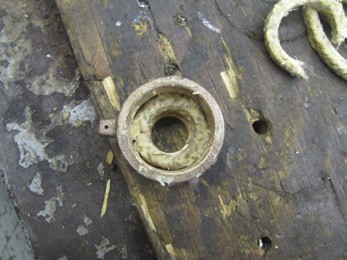 Rings of flax packing should be inserted into the packing nut with the cuts offset by 120 degrees from one ring to the next.

While working on a stuffing box, it’s also a good time to inspect the hose clamps for corrosion and wear. Take a look at the hose for cracking or softness, indicating it’s time to replace it.

One thought on “Stuffing Box Maintenance”

I Learned to Sail at J World